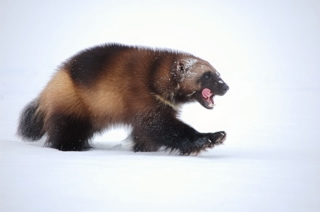 Wolverines are currently recolonizing Washington’s Cascade Mountains. However, it is unknown how the population will change under future climate change, due to wolverines’ apparent reliance on spring snow cover. Because of this, it is essential that managers be able to monitor the population as efficiently as possible. For rare species like wolverines, this can be done using remote cameras and species distribution or abundance models tailored for low-density species. At the same time, other rare carnivores in the Cascades, such as Canada lynx and montane red foxes, are similarly vulnerable to climate change and may experience similar population or range shifts. Since monitoring surveys for wolverines may also lead to detections of lynx and foxes, managers may be able to capitalize on this source of data to monitor populations of lynxes, foxes, and other climate-sensitive carnivores.

This project uses power analysis and a multi-scale model of species distribution to develop possible camera-based monitoring survey designs for wolverines, with recommendations for adapting the survey designs to monitor other carnivore species in the Cascades. It will involve simulating statistical power (ability to detect trends) under multiple scenarios of population change, number of cameras, and spatial arrangement of cameras, both for wolverines and for Canada lynx and montane red foxes. Managers will be able to use the results of this project to develop a long-term monitoring framework for wolverines and other carnivores in the Cascades, with possible applications to the Northern Rocky Mountains and other mountainous areas of the Pacific Northwest.